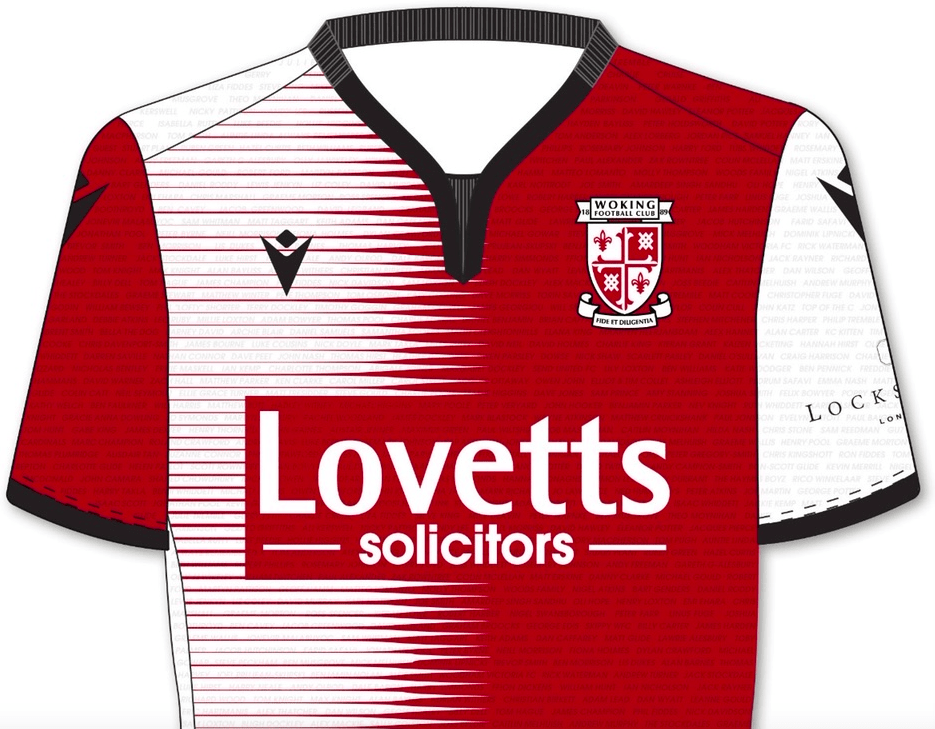 Lovetts Solicitors has been named as the 2020/21 homeshirt sponsor for Woking FC. The announcement comes after two seasons spent as a ground and advertising sponsor with the National League side, and increases the firm’s visibility across the club and the local community.

Earlier this month Woking FC, who play in the Vanarama National League in the fifth-tier of English football, announced that Lovetts Solicitors is to be the club’s official homeshirt sponsor for the 2020-21 season. The away shirt will be sponsored by Buckinghamshire-based firm Millenium Locksmiths, and a new third kit – displaying a special NHS Thank-you message on the front – has also been created.

It’s the first time in Woking’s history that different sponsors have been selected for different shirts, and also sees the introduction of the club’s #GetBehindTheShirt campaign, which allows fans to have their name woven into the fabric. For every third kit shirt sold, £5 will be donated to NHS charities.

“The firm is hugely proud to have been named as the official homeshirt sponsor of Woking FC,” said Michael Higgins, MD for Lovetts. “As a supporter of the club for two seasons now, we recognise the unique challenges that the current coronavirus pandemic poses to businesses across the country, and we are keen to continue to support our local club. It’s a fantastic organisation, we know that football will start up again, and I’m confident that when the 2020/21 season does begin – whatever guise that is in – Woking will continue to inspire as a successful contributor to both the league and the local community.”

Individual shirt allocation was determined by way of a raffle for existing club sponsors, which you can see taking place here. Woking’s iconic home kit is a particularly strong fit for Lovetts, which also uses a heavily red and white theme in its logo.

In addition to entertaining on the pitch, Woking FC does a tremendous amount of work in and on behalf of the local area. The Woking in the Community scheme was launched in 2004 to leverage sport to provide individuals with the opportunity to participate in educational, health and fun based activities regardless of age, gender, ethnicity and ability. Specific programmes include after school clubs, coaching academies, healthy living initiatives, and there is a particular focus on including children who are perceived to be socially excluded.

Lovetts is extremely keen to be involved in as much of this sort of work as possible, and the firm also partners with local mental health charity, Oakleaf Enterprise, which focusses on transforming lives and building new futures for adults managing their mental ill-health.